Albanian parts of the Prespa lakes nominated as ‘Wetland of International Importance’ under the the Ramsar Convention on Wetlands.

(Tirana) After Butrint, the Karavaste Lagoon, the River Buna and Shkodra Lake, the Albanian Government has nominated on 13.06.2013 through decision nr 489 (CoM) the Albanian parts of both Prespa lakes as Wetland of International Importance under the Ramsar Convention on Wetlands, which Albania has signed at 29.2.1996.

‘The nomination of the Albanian parts paves the way for a trilateral conservation regime for the valuable lakes’ ecosystem, which is the habitat of rare and endangered waterfowl such as the Dalmatian Pelican (Pelecanus crispus) or the White Pelican (Pelecanus onocrotalus) which is in the meantime one of the largest breeding colony in Europe. Moreover, the entire area of the lakes is an important wintering place for thousands of water-birds coming from their breeding places in the Palearctic region’, explained Fatos Bundo the Director of the Biodiversity Department at the Ministry of Environment, Forests and Water Administration of the Republic of Albania.

Various surveys revealed in the last years that the Albanian region of Prespa lakes hosts an exceptional biodiversity, with the wide region being recognized as a European and Global Biodiversity Hotspot, not only because of the sheer number of species and habitats present but also due to their quality, such as rarity and conservation significance.

The actual area nominated as protected natural zone under the Ramsar nomination has a total surface of 15,118.58 ha with following land use categories:

The specifically protected natural zone is in compliance with the zoning of the National Park “Prespa”, determined in the park management plan.

The social-economic activities, which are permitted to be carried out in the specifically protected natural zone “Ramsar”, are of traditional character, such as (wise use of fish resources or sustainable agricultural practices), allowing for the preservation of the environmental values developed in compliance with the level of the protection according the objectives of the management plan of the National Park Prespa.

The nomination of the Ramsar Site was supported in the framework of the project ‘Transboundary Biosphere Reserve Prespa – Support to the National Park Prespa in Albania’ (BMZ 2001 66 785) under the bilateral Cooperation between Albania and Germany through its Bank for Reconstruction KfW.

For more information, do not hesitate to contact us at: 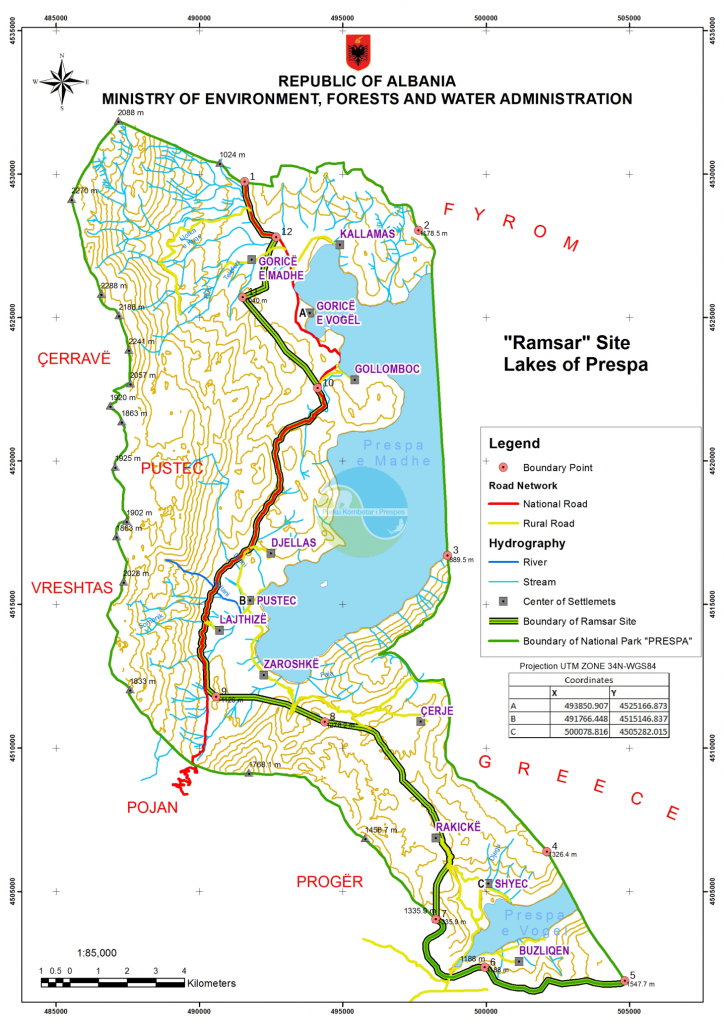